Written by Arjun
Billionaire investors have the habit of saying one thing and doing another. This puts average investors in jeopardy. Therefore, the best solution is to steer clear of their views and not implement them, a leading expert in the stock market has advised

Warren Buffett said he was not selling stocks ….

Warren Buffett is regarded as the gold standard amongst Billionaire investors.

He has been guiding us from time immemorial about the principles of value investing.

However, the fact is that even that he has fallen prey to the bad habit of saying one thing and doing another.

When Becky Quick, the charming anchor at CNBC, asked Warren in February 2020 whether he was dumping any stocks during the CoronaVirus pandemic crash, he denied it.

“We certainly won’t be selling stocks during the decline,” he said in a vehement manner.

“I would prefer it if Berkshire could buy at the resulting lower prices,” he added.

Yet, the Oracle of Omaha shocked everyone by announcing a few days later that Berkshire had dumped all of the airline stocks in its portfolio.

When everybody thought Buffett is neutral & sitting on the sidelines, the actual reality is – he is selling.

First all airlines and now a bank.

Warren also changed his stance about wanting to buy stocks at lower prices.

He has now decided to hoard cash and postpone fresh investments.

Berkshire Hathaway has been selling stocks & stockpiling even more cash. “If Buffett himself isn’t seeing opportunities, even in his own stock, what are we to think about the recent market selloff? Is it not a buying opportunity for long-term investors?” https://t.co/RnXbC5ailW 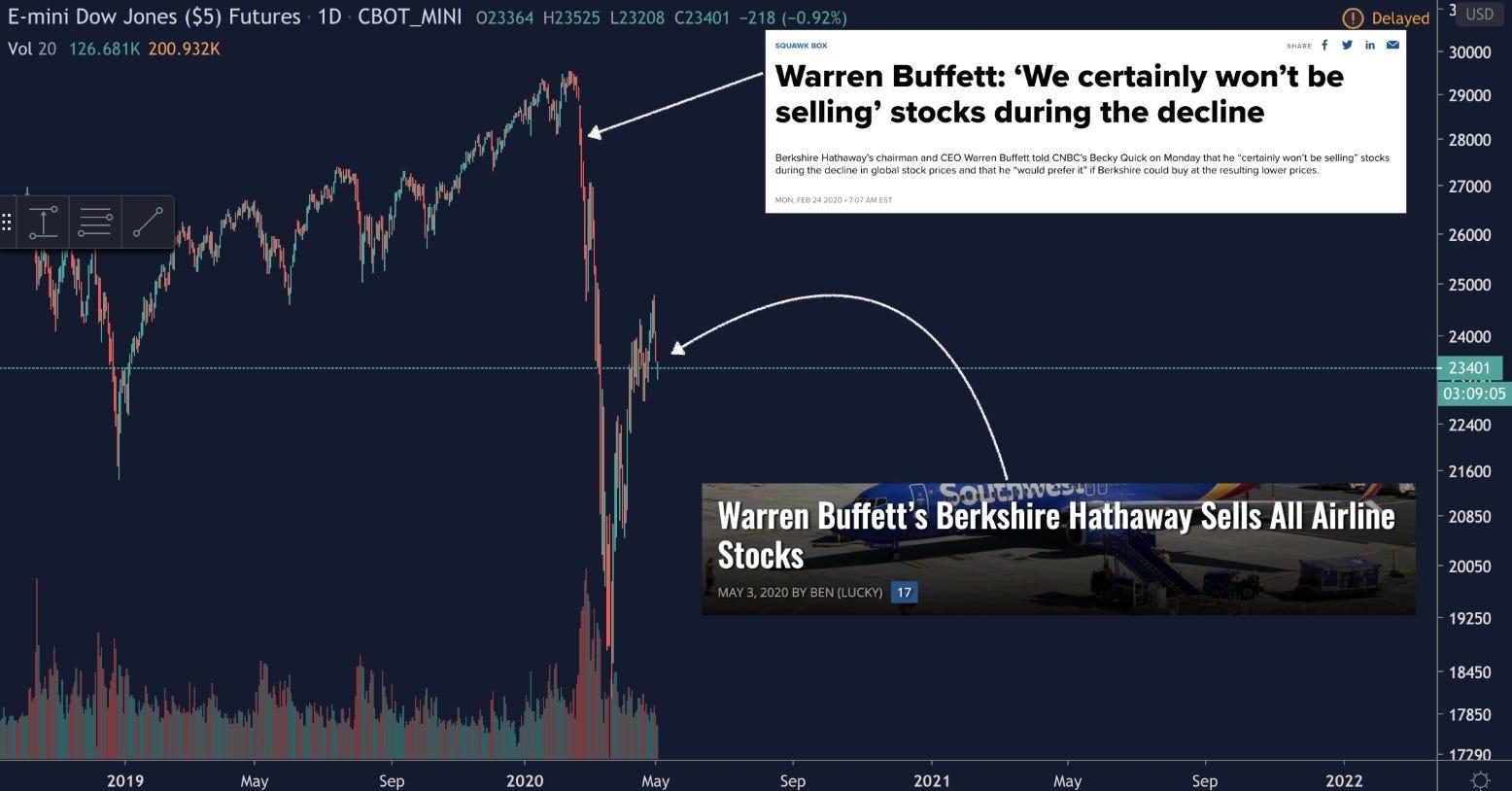 Billionaires cannot see the future. Their guess is as good as that of the Average Joe

Josh Brown, the CEO of Ritholtz Wealth Management, cautioned us not to implement the views of the celebrity investors but to act on our own wisdom.

He pointed out that Billionaires cannot see the future and have no idea what’s going to happen tomorrow or the next day.

Their guess as to what will happen in the stock market tomorrow is as good as anyone else’s.

He also explained that these investors have a sixth sense and usually trade off on their gut feeling.

They don’t usually use repeatable and systematic strategies.

He also warned that while the celebrity investors may reveal in the interview what stocks they sold or bought, they may have no inclination or opportunity to update viewers about whether they have changed their mind about the stock.

Tepper and Druckenmiller were bullish. Now they say stocks are overvalued

Josh Brown cited the examples of David Tepper and Stan Druckenmiller to prove his point that Billionaires can change their mind in an instant.

In January, both celebrity investors were bullish about stocks and were buying them aggressively.

However, when the markets crashed over the CoronaVirus pandemic, both changed their minds and opined that stocks are now “overvalued” and deserve to be dumped.

“The market is pretty high and the Fed has put a lot of money in here … The market is by anybody’s standard pretty full”, Tepper said.

Stan Druckenmiller added to the gloom by stating that the prospect of a V-shaped recovery in the U.S. is “a fantasy”.

He also alleged that the Risk-Reward in stocks is the worst that he has seen in his distinguished career on Wall Street.

The prospect of a V-shaped recovery in the U.S. is “a fantasy”, according to Druckenmiller https://t.co/vscB2HWoN6


Are the Billionaires gaming the stock market?

The change in stance of Tepper and Druckenmiller from Bullish to Bearish did not go down well with some influential personalities like President Donald Trump.

Trump, who is famous for his outspoken views, alleged that the Billionaires may be indulging in the nefarious practice of spooking the markets so that they can rake in big bucks on their short positions.

When the so-called “rich guys” speak negatively about the market, you must always remember that some are betting big against it, and make a lot of money if it goes down. Then they go positive, get big publicity, and make it going up. They get you both ways. Barely legal?

Earlier, Billionaire Bill Ackman had created a controversy by causing the market to tank and then revealing that he had made $2.6 Billion from his shorts.

This guy should be locked up… market manipulators make me sick.https://t.co/nZLqKpFPll

Bill Ackman denied that there was any gaming by him. He claimed that he had already raked in a bulk of the profits from the shorts before coming on TV.

Anyway, the bottomline of the episode is that we will land up in a soup if we listen to the celebrities and do as they say.

“I don’t think that individual investors or the vast majority of professional investors … should be reacting at all to what they have to say,” Brown rightly said.

“Do not change your asset allocation based on Druckenmiller because Druckenmiller ain’t gonna call you when he has a different opinion a few days later,” he concluded.